We bumped into an amazing way of 3d printing ceramics by Olivier van Herpt and StudioVanBroekhoven. Olivier van Herpt, like many artists, found himself dissatisfied with the artistic capabilities of traditional 3D printers and 3D printing materials.


“When I first started researching 3D printing the technology was an exciting and interesting one,” the Dutch sculptor says. “But, the desktop 3D printers on offer were unable to produce things at a human scale. Large and medium scale functional design objects that we use such as bowls, plates & decorative objects could not be made. The objects made with desktop 3D printers were also low in heat resistance and could not be food safe. Industrial 3D printers could make food safe objects for everyday use but these would be too costly to produce.”

Honoring the old adage “if you want something done right, you’ve got to do it yourself,” van Herpt spent two years making his own unique 3D printer capable of printing with clay. Clay 3D printers are still something of a rarity, and the ones that exist require specialized clay filament. Van Herpt designed and made his own extruder that was capable of printing with ordinary, garden-variety hard clay.

Van Herpt, an industrial design graduate of the Design Academy Eindhoven, began using his printer to create tall, thin ceramic vessels in a range of striking shapes and textures. His work has been well-received, and he has continued to push the limits of creativity and design by tinkering with the capabilities of 3D printers. He has worked collaboratively with several other artists to incorporate other ideas and media into his work; in his latest project, he has partnered with spatial sound designer Ricky van Broekhoven to create “Solid Vibrations.”

Van Broekhoven, a musician who holds degrees in design and architecture, uses sound to create shape, movement and imagery in his arresting visual art. Van Herpt had observed the fine lines the 3D printer produced on his clay pieces, and decided to work with those lines as art in themselves. He enlisted the help of Van Broekvhen, who mounted a speaker below the print platform; that speaker was then used to play several different low, vibrating sounds, which rose up through the print platform and caused it to vibrate with the tones as the printer laid down layers of clay. The result was a series of pots with fine grooves or rippling textures – visual representations of sound made permanent.

Those visual representations take many forms; some of the finished works resemble woven wicker, others call to mind fish scales. The patterns are beautifully neat and uniform, as if they were etched by an industrial machine instead of a printer being shaken by sounds. Looking at them, you can’t help but try to imagine the kinds of sounds that may have generated their creation. 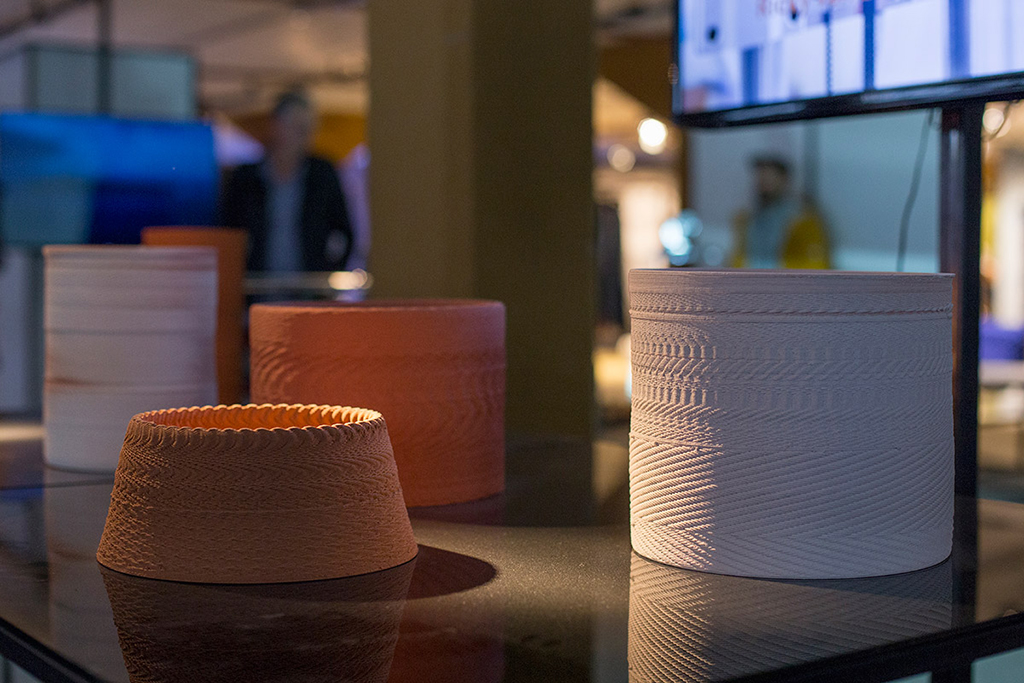 The project is ongoing, and while the duo have so far only used abstract sound tones in the process, there’s no reason why more personal sounds couldn’t be used – speech, or music. Imagine a clay pot with your favorite song or album etched onto it in a woven pattern, or your child’s speech recorded in fine ripples on a cup. Would a vessel inscribed with the chanting of monks instill a peaceful feeling in the observer? Conversely, would punk rock create a chaotic look? The project lends itself to endless possibilities for experimentation.

This isn’t the first time artists have used sound to create 3D printed art. We’ve seen intricate, complex jewelry created by printing the sound waves of just a few words, and sculptures made from the frequencies of nature. Solid Vibrations is unique in that the digital middleman is cut out – rather than printing images digitally generated from sound waves, the printer moves with the rhythm of the sound waves themselves, directly imprinting them into the clay. It used to be that sound and vision were two separate elements, but a new and fascinating art movement seems to be growing: art that blurs the line between the senses. Discuss in the Pushing the Boundaries of 3D Printing forum over at 3DPB.com.